The Incomparable 586: Discotheques in Disused Churches

We return to “Ted Lasso” to discuss the second season of the Apple TV+ comedy-become-dramedy, with an increased view into mental health, questions of relationship power dynamics, the power of Rom-Communism and Holiday Specials, and much more.

[The original version had two minutes of weird audio at 18:30. You can press “forward 30 seconds” four times, or delete the file and re-download.]

Watchers of the Plus 17: Babyfaces, Heels and the Closer

Finale time again for Sam and Moze. As things close off for the season we have some new series you might not have even heard about. Of course Moze tried to draw lines back to professional wresting and story writing this streaming season. Sam gave us a #CovidCinemaMinute shooting on two recent films you might want to venture out to enjoy.

We wrap up our coverage of the second season of “Ted Lasso” by discussing the season as a whole, from the first penalty kick to the last.

It’s the big finale of season two. On the field, Richmond tries to return to the Premier League. Off the field, things are falling apart. Sam, Keeley, Nate, and Trent Crimm make big moves. Higgins plays with puppies. Roy visits the Diamond Dogs. Jamie shows growth. Dani seeks redemption. Jan Maas speaks the truth. And Ted cites the work of a triple wizard. Onward to season three—after we spend the length of a football match breaking this one down.

(Thanks for being with us the last 22 weeks. And join us next week for a special season-wrap episode of Football is Life!)

Watchers of the Plus 16: What If a Soprano Could Sing?

The multiverse of channels got out of control and Sam and Moze were separated by a Chicago-sized gap. That means that we’re late to the dance, but we had a few drinks before we got here. There’s a load of great content out there that has surprised us lately! Here are our lists.

Things are moving toward the season finale, and it doesn’t look good. Doc Sharon departs and exchanges final goodbyes with Ted. Roy and Keeley deal with her success and with questions about their relationship. Rebecca is presented with an offer she can’t refuse, but can Sam refuse it? It’s always darkest before the dawn, right Ted? Right?!

We take a break from the usual Ted Lasso formula to follow Coach Beard on a wild night of adventures, that might have happened…or not?

The FA cup semifinal. A bike accident. Dating apps. Fathers and children. It all comes to a head in this episode of “Ted Lasso.”

It has been too long, and Moze and Sam made up for it on this one. We took a look at the latest two episodes of “What if…?” just to make sure that the cartoon universes are stable. Then Sam makes a full-on sales call to convince Moze that the newest MCU film is better than what has come before. Both watchers also went down two very different streams to find some fixed points that might be worth your time.

This week we discuss Ted’s reluctance to actually talk about his problems to Doc Sharon, the whole I-Got-You-Babe thing between Roy and Keeley, the mysterious comings and goings of Coach Beard, and most importantly, our frustration with Nate’s bad behavior.

We’ve reached the halfway point of season 2 of “Ted Lasso,” and things are starting to come together in this episode. We discuss themes of change, of integrating positive and negative parts of your personality, and parents and children. Also there’s some utterly unfounded speculation about future “Ted Lasso” spin-offs. Sad little cake, soggy bottom!

Myke and Jason discuss “Loki” and then dip into the first episode of “Ted Lasso” season two.

Watchers of the Plus 14: Thanos Loves a Good Argument

Short show, as we take a look at the Wakandan Star Lord with a sprinkle of Santa Ted. Moze gives some recommendations on what you can consume if you have a short time—or a marathon duration of time.

Comrades, let us speak of the greatness of Rom-Communism. Roy Kent finally realizes what he needs to do with his life. Rebecca shows her claws. Nate reserves a table. It had to be you, Ted Lasso.

Watchers of the Plus 13: What If a Polka Dot Could Kill?

Big stuff this week. The whole reason Sam and Moze started this new adventure. To watch, comment, and never interfere. “What If…” We also checked out that new James Gunn film. 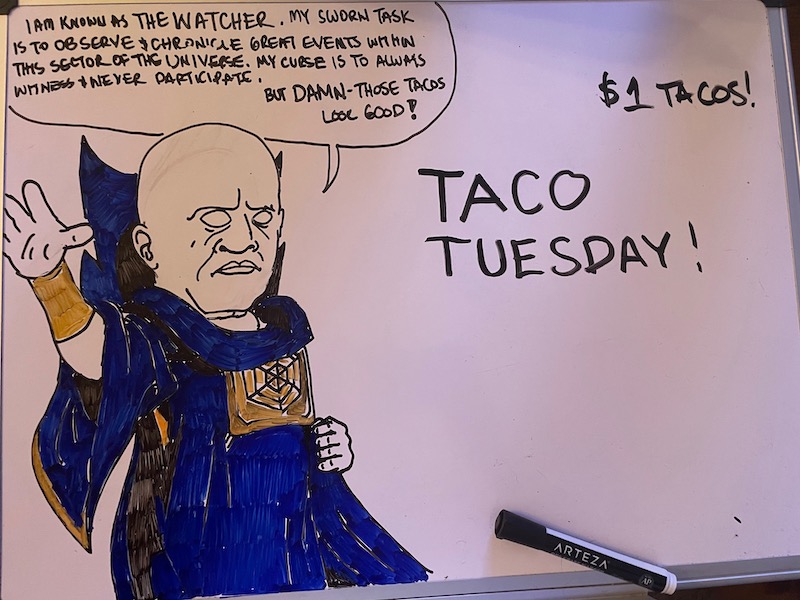 The “Ted Lasso” premiere trilogy concludes with Sam taking a big step, Jamie seeking his place in the world, a revealing visit from Sassy, and the adventures of Nora and Rebecca. Also, have you signed up for Bantr yet?

Watchers of the Plus 12: Greyskull Powered Streaming

Lots of action and releasing this week. Some of it beyond polarizing, and some quiet and under the radar. Sam and Moze took a look at some old standards like a new “Grand Tour” installment, as well as exploring the hype and hysteria connected to “Masters of the Universe.” Moze was allowed time to flex his conspiracy muscles to “educate” Sam on some of the grey areas online.

Why does it smell like a Parisian bedroom in here? Regardless, we’re back to discuss “Lavender,” which seems to be zeroing in on some key themes of season 2 of “Ted Lasso.” Is Ted guilty of creating a workplace that’s comfortable, but unsuccessful? Does the arrival of the Doc threaten Ted as a coach, or as a person in need of therapy himself? Why is Nate abusing Will? Why can’t Higgins find an office? Can Roy find a place for himself now that the youth football season is over? We convened a group of Tall Yodas to dispense some wisdom at you.

Watchers of the Plus 11: Coast to Coast Reunion Tour

We’re back from the long hiatus that took Moze from the North Bay of California to the Triangle of North Carolina. Sam and Moze catch up with all the shows you’ve been watching and a few that you might have missed, on platforms you may not have thought to watch. Good thing your Watchers are here to stare directly into the streams.

Football…is death! But also football is life. But also sometimes football is football. We’re kicking off (eh? ehhh?) season two of our favorite American-football-coach-turned-British-football-coach feel-good series. What challenges await for the team, how will Ted and Doctor Sharon Fieldstone see eye to eye, and who is this episode’s MVP and why is it Roy Kent?

We’ve reached the end of our first-season rewatch! Season two awaits! But first, let’s revisit the final game of the Premier League season, as Richmond tries desperately to avoid relegation. (Which means we need to explain relegation.) What lessons has Ted taught his team, and what has he learned himself?

In this episode, Roy Kent learns and grows (while also living in a trash can like Oscar the Grouch), and Rebecca finally comes clean about her plan to ruin Ted and the team. Also, Coach Beard has had enough! It’s all to play for as we begin to wind down our rewatch of the first season of “Ted Lasso.”

Crawl out of the storage area under the team bus and get ready to join an intense team of relationship experts: The Diamond Dogs. Meanwhile, Keely answers some tough questions. Jamie, Roy, and Keely have some awkward conversations. And Ted and Rupert play darts. Barbecue Sauce!

Liverpool has much to offer when it comes to nightlife, from pubs and clubs to the great Asian pastime of Karaoke! In this episode we meet Sassy, and get some depictions of female friendships that are not what we usually see on TV. Ted’s distress over his impending divorce reaches a fever pitch. And Rebecca sings “Let It Go” with some surprising accompaniment.

Football is Life! It’s a lesson taught to us by enthusiastic striker Dani Rojas, who is a refreshing change of pace from Jamie Tartt—until the long time curse of the training room rears its head! Put your prized possessions in the bin so we can set them on fire.

Relationships are hard. Whether it’s Roy and Jamie or Rebecca and Rupert—hey, it’s Anthony Stewart Head!—things can be fraught, even if you’re participating in a charity banquet. Don’t forget—it’s for the children.

Watchers of the Plus 3: Piles of Bits Smothered in Content

There has been a bit of news this week, so we’ve plowed into it. Was “Godzilla vs. Kong” high art? Can a six-part show like “Falcon and Winter Solider” have time to create a sag in the middle of the season? All this and more covered on this week’s episode.

The Incomparable 537: Roast Me, Amigo!

Football is life! But even if you don’t care about sports, you should still watch “Ted Lasso” on Apple TV+. It’s a very funny show that’s also full of empathy and respect for its characters, which never goes for the cheap joke, and takes the tropes of every sports movie you’ve seen and uses them in ways you’re not expecting. And we’ve left plenty of space before the Spoiler Horn for our cross-Atlantic panel to explain why you should watch it and why we love this fusion of American and English sensibilities. We believe in Ted Lasso, and you will too.