Our all-listener panel is back with Supergirl Season 5!

Wait… this is ALSO not an episode about Eve.

Sponsored by the Supergirl Supercar!

This week, we discuss:

-J’onn getting manipulated by M’yrnn?

-Not actually much about Eve?

-James PTSDing or powering up?

Topics this week: - James not being quite dead yet;

Under discussion this time:

Under discussion this week:

Under discussion this time: - So many Valentine’s Days motifs… - DC’s take on Venom; - Kara trying to work with Alex; - Ben Lockwood putting his child in danger; - Brainy and Nia’s progress; - James and Lena’s woes; and - The President making lots of bad calls.

This time we have sisters discussing sisters! Also under discussion: - new Alex; - dude-bro rage; - the keeping of far too many secrets; - Nia’s powerful, and painful, origin story

Under discussion this time:

No time for a clever synopsis; too much to cover. It’s crossover time!

Worlds collide and strange things are afoot at the Circle K! The Speedy Arrowcast convenes with a daunting task, taking on the entirety of the CW’s three-part superhero crossover, Elseworlds. We discuss why it’s great to see Ollie lighten up, a long-awaited reveal about the STAR Labs pipeline, and many, many Batman references. Plus, a teaser of next year’s crossover has us wondering what is in store for DC’s multiverse cosmology. And, to round it all out, we cross over to the Marvel universe for Superhero Sweep as we dissect every frame of the Avengers: Endgame trailer. 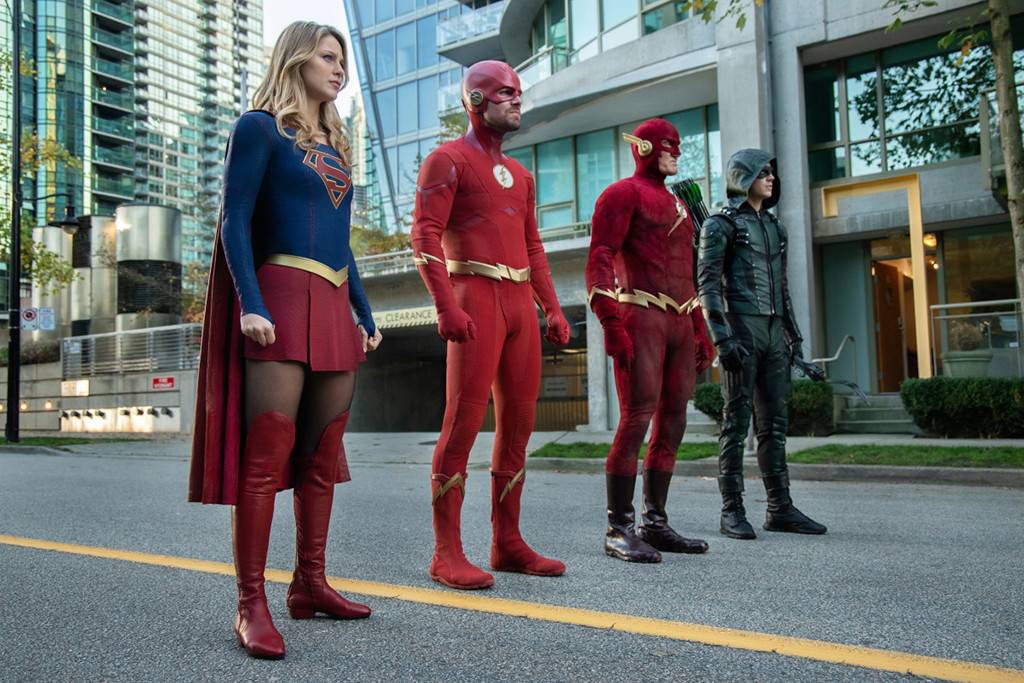 This week, the episode is all about plans!

Do the plans all make sense? We’ll leave it to you to decide. (But the answer is no.)

In this episode, Lena makes a discovery while failing to cure cancer, Manchester Black takes to torture, Ben Lockwood takes to TV, and Supergirl talks down a dragon. Meanwhile, Brainy is still mostly comic relief but does get to have one great operatic fight.

Brainy continues to be the butt of jokes! Kara is truly terrible at journalism and it mystifies our panel how the writers get this so wrong so often. There were also things our panel enjoyed.

The DEO doesn’t understand what an atmosphere is. Meanwhile, we get a back story for how Agent Liberty became radicalized. Does the explanation work? We’ll leave it to you to decide, but we still applaud the effort to make the villain compelling.

Our panel shares their thoughts on topics including the alien-haters’ plots, rookie reporter Nia’s bravenesses, LCorp’s continuing poor security, and Lena’s nigh-inevitable realization that her BFF Kara is that lying alien Supergirl.

Supergirl is back for Season Four! Under discussion by our all-listener panel this week:

Finale it’s the Season Finally! Wait, was that confusing? So is this episode. Things happen, few of which make logical sense, except perhaps James’s decision to come out as Iron Man/Guardian.

While discussing the penultimate episode of season three, our hosts are flummoxed by Sam’s seeming Kryptonian as Reign but Human as Sam nature, since she totally came from Krypton as far as anyone can tell. What did the Goth Powerpuff Girls do to her?

The Supercast crew is very pro-Murderbot as long as they’re just interrupting potential love triangles. Our panel is also quite underwhelmed by yet another CW show attempting to solve gun violence in one episode, especially given that the DEO moving to non-lethal weapons very much depends on the definition of non-lethal for different alien species.

Back with another installment of Alex lies to Ruby, in an episode that shows Reign can actually border on interesting, and that Kara’s mom is still alive but not a hugger. And Winn and Ruby bond over having supervillain parents.

Once again the questionable tactics of lying to one’s friends, or lying to protect one’s friends, is discussed, along with (gasp) an actual good reason for James to want to be Guardian. And there’s a weird cult with funky rocks that create Worldkillers. Because that makes sense.

Much discussion this week about how deception is maybe, just maybe, the wrong policy most of the time, especially when talking to the daughter of a supervillain. And Supergirl continues to cede the moral high ground to Lena in the “No one should be allowed to have Kryptonite” debate.

It’s all Super Science and Meanwhiles this week on the podcast as an eclipse for some reason affects Supergirl more than night does. Lena is suddenly mistrusted again because she used (gasp!) Kryptonite to contain Reign. Supergirl hates exercise! James chooses Lena over Supergirl. Winn gives Alex a Supersuit with magnets!

Team Supergirl is out to stop Pestilence, while Lena works to determine how to remove Reign from Sam. You know, by electrocuting her repeatedly. Meanwhile, social media evidently doesn’t exist in the future.

M’yrnn J’onzz attempts to mend his failing mental faculties but succeeds in putting the whammy on most of the DEO. Kara learns some cape-fu from Mon El but gives vent to a lot of her problems with him, under the influence(?) of the whammy. And Lena tries to find the dividing line between Sam and Reign.

Supergirl is finally back, and under discussion this week are evolving Worldkillers, killer toys, Pa J’onzz’s deteriorating mental faculties, and Team Supergirl’s skills at Karaoke.

Team Supergirl goes after Purity with all the subtlety of Johnny Weir’s hair! The show gets a villian who’s as interesting as her alter-ego for a change, Mon-El and Imra carry the CW drama for the week, and Alex seems to be prone to drastic changes in behavior from one scene to the next.

Multiple assassination attempts! The reappearance of Lena’s annoying mother, who has the virtue of at least being more interesting than Edge. Oh, and what’s up with Sam/Reign’s physiology?

In the course of discussing this episode, our panel inaugurates a new segment called “Super Science!”, in which eye-roll inducing scientific whoppers are properly called out. In this case, gender-deterministic stellar radiation is chief offender, but there are several other contenders. All in service of a solid episode, funnily enough.

The effectiveness of glasses and masks as disguises in the Berlantiverse is discussed, along with the general “Meh” opinion of Reign as a character. Also, maybe an explanation of Legion Rings would’ve been nice?

Our panel discusses the Season 3 mid-season finale, covering Sam’s lack of work/super-villain balance, the possibility of finding a non-spiked beverage at Kara’s Holiday Party, and Supergirl’s failure to take her fight with Reign to somewhere other than a city full of people.

Our panel discusses the 4-part crossover in a slightly jumbo episode. Topics under consideration are the fact that the bad guys get the best lines, Snart is entirely awesome, and who decided on the Earth numbering scheme, anyway?

A time like this comes only once per year: it’s crossover season. Team Speedy Arrowcast assembles to discuss the entire four-way crossover of DC’s TV universe (Supergirl, Arrow, The Flash, and DC’s Legends of Tomorrow), and fields live questions from readers. At the end, only one co-host will be left standing.

Important topics of discussions include DC’s stellar job at inclusivity and diversity, John Diggle’s superpower, why superheroes should never get married, our delight over the return of a familiar face, and our frustration over the story’s major death. Plus, we review reader suggestions for our new rating rubric.

Our panel questions why the kids at Midvale High are oddly meh about the murder (or even just death) of a student, the fact that apparently of everyone at the DEO, only J’onn J’onzz owns a car, and the vagaries of Alex and Kara coming to terms with their recent relationship trouble.

Also, Trish is clearly not over the Maggie-Alex breakup, because she just can’t stop calling Alex “Maggie.”

Our panel discusses the polysyllabic chemicals and Morgan Edge’s questionable plans to profit from causing death and destruction in his city, along with Alex and Maggie’s breakup as an example of grownups behaving like grownups, something the CW doesn’t always specialize in.

Supergirl is back and so is our listener-led podcast breaking down each episode! It’s finally here… the season premiere!

The Supergirl Supercast wraps the season with coverage of the finale! Nevertheless, they persisted.

In discussing the penultimate episode of Season 2, “Resist,” Trish and David praise the return of Cat Grant, rename Cyborg Superman to R2D2 and question the fictional lineage of Linda Carter’s alien-shape-shifter President. Also, Trish suggests giving Alaska to the Daxomites.

Edited by Seth Heasley, who as a born and bred Alaskan objects to Trish’s plan.

Our listener panel reconvenes to discuss the episode “City of Lost Children”, which is sort of like “City on the Edge Of Forever”, except with… nope, that’s not it.

The Supergirl Supercast returns to discuss “Alex.” Tactical underwear are discussed, along with Alex’s many skillful MacGyverings.

We’re back with reviews of three recent episodes of “Supergirl!” Musical complications and annoying alien parents!

Our listener-generated “Supergirl” reviews continue with this episode, catching up with “The Darkest Place” and “Medusa” from November.

Turn and face the strange! Lots of ch-ch-changes going on in National City. Lisa Schmeiser and our panel of podcast listeners have a recap!

Thanks to Seth Hensley for editing.

The Supergirl Supercast returns for a second installment! In these episodes Lynda Carter comes to town, we explore the alien underbelly of National City, and get to know Mon-El a lot better. Plus there are surprise alien reveals aplenty, and Alex makes a new friend.