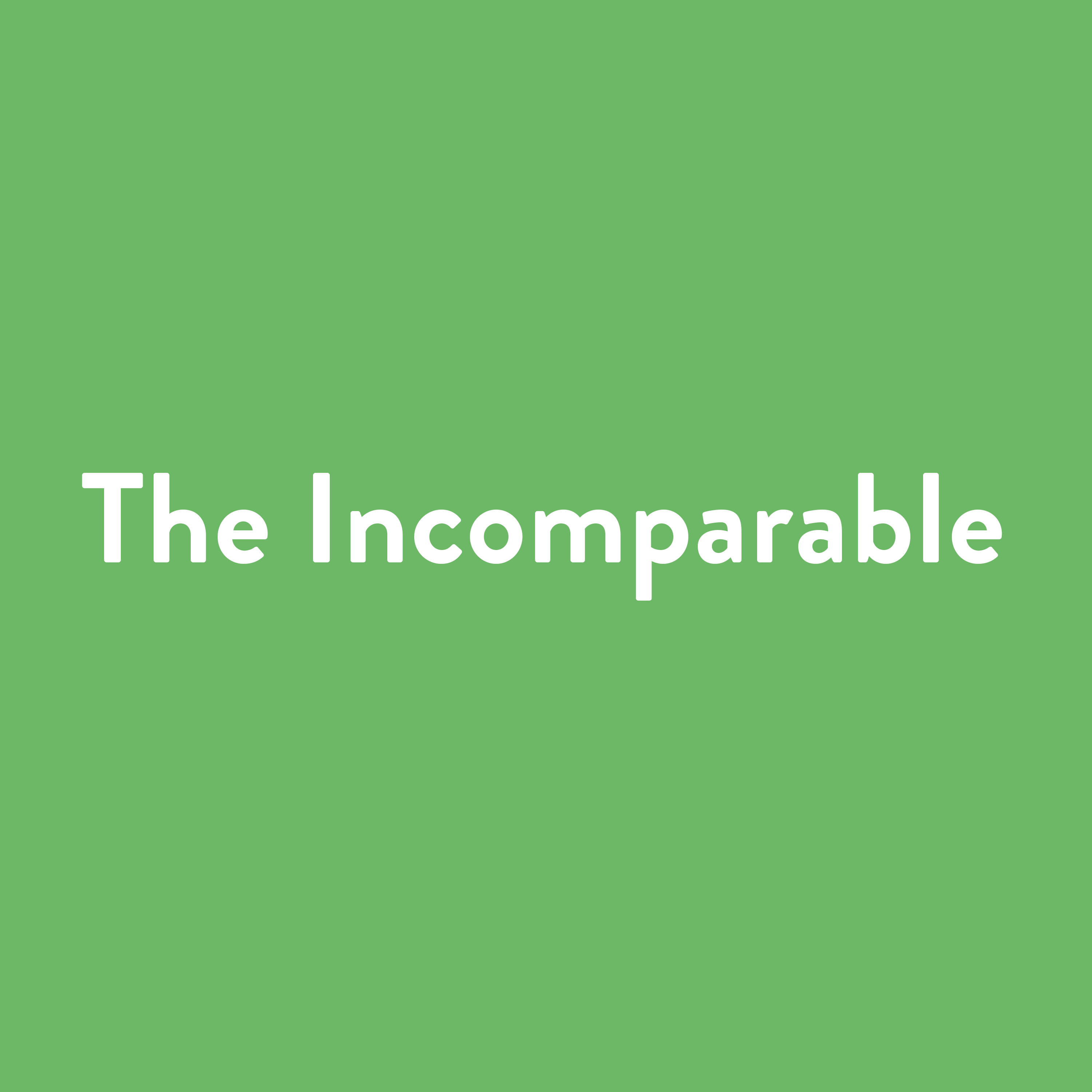 The Incomparable 504: Bullied by Local Toughs and Snails

We love NBC’s “The Good Place” so much, we couldn’t restrain ourselves to a single episode about its final season. Straight from The Medium Place, another group of Incomparable panelists wrap up The Good Place’s four-season run by walking through each season and reminiscing about the characters’ arcs. Plus, how well was the final season paced? Did we need more time to say goodbye to Team Cockroach?

The Incomparable 503: God Is a Job Nobody Wants

NBC’s “The Good Place” recently completed its fourth and final season. We send off this instant television classic with a discussion of its view of the afterlife, philosophy, and dumb jokes. Did the final season’s shift in perspective work? Did the final episode provide the closure we wanted? Shut up, Glenn!

Welcome, everything is fine on this look back at The Good Place, and perhaps more importantly, everything is weepy on the meta side with Team Cockroach reminiscing about the group’s origin, journey, and inevitable crossing of the door. Whenever you’re ready.

Team Cockroach rides into the sunset with this last episode of the flashcast, as we all recall our memories and say goodbye to our friends.

The gang finally arrives on The Good Place, and are pleased with the sound of chimes and the beautiful landscaping, but things aren’t what they seem.

The Bad Place attempts to anticipate the afterlife by way of hilarious experiments. Chidi struggles with his own adequacy after reading Eleanor’s file. Vanity is its own torture. And Pikachu has a beeline to the powers that be.

Team cockroach assembles again to ride the final wave of episodes, and there’s a lot to talk about, when Chidi has to come up with an alternative to the current afterlife in less than 10 minutes while the gang supports him and stalls Maya Rudolph’s delight of a judge.

In an attempt to plan a better future, Chidi considers his past.

TeeVee 592: The Good Place S4E8 Review: "The Funeral to End All Funerals"

The group awaits the judge’s final decision on the fate of human existence.

After recapping last week’s filler episode, Team Cockroach drives right off the first cliffhanger of the final season. Secrets come tumbling out as the experiment reaches its official end.

TeeVee 585: The Good Place S4E5 Review: "Employee of the Bearimy"

Jason and Michael cart to the Bad Place to defy Shawn and rescue Janet. Eleanor and Tahani babysit Chidi and the New Crew with fake puzzles and lake houses, and demons and tunnels and Dereks and clavicles don’t survive!

Team Cockroach assembles once again to discuss all of the theories that became true, the best lines from the episode, and whatever wild mysteries lie ahead.

Eleanor, Michael and Jason team up to torture Chidi, who is too relaxed to help his new students learn ethics, but Eleanor becomes too obsessed with the task. Janet helps Tahani find common ground with John. As the episode ends, a mysterious hooded figure on a handcar makes their way toward the experimental Good Place.

It’s heartbreak week on The Good Place. Eleanor must force Chidi and Simone together, Jason must split with Janet and Blake Bortles, and Brent has to pick up forks for waitresses. If your breakup routine involves leadership skills, Mountain Dew and a Diamond Elite VIP ticket to the Best Place, step right this way.

Andrew, Sarah and Javier get together once again to explore the season premiere in an effort to figure out boring Norwegians, irredeemable misogynists and ineffable Dereks.

Is it possible for anyone to be good enough to get in to the Good Place? The gang is about to find out. They create a new neighborhood in the Medium Place and try with four new cockroaches… but Sean and Vicky threaten to ruin it all.

Michael and the gang are four Oreos away from heaven, but they haven’t escaped their troubles. The Committee, unintended consequences, crying while British…It’s so upsetting, I’m gonna try to shake my fist at you!

In Janet’s void, everyone is D’arcy Carden. Think Funny Tatiana Maslany in a blank, white space. It causes Eleanor to have an identity crisis, which is calmed by a momentous smooch. Michael and Janet pull the gang through to Accounting, then send them up a pneumatic tube to the ACTUAL FORKING GOOD PLACE!

Michael and Janet discover the system is rigged by spending time in Canada with miserable, point-confined Doug Forcett (and kicking Shawn/demon butt). Eleanor expresses her love to Chidi just as the gang absconds to Janet’s void. By dying! NBD.

We meet Donkey Doug and guest Cockroach Marcos! We dive into episodes four and five, cope with the fun of existential dread and get rich quick in Florida. And if you can’t figure out how to break up with us, keep on snapping!

The new Good Place episode is out and Team Cockroach reactions are mixed: can the writers get us there already? Walk through the inter-dimensional door, but be careful where you step, because season 3 has some surprises up its sleeve.

The mighty cockroaches gather once again to discuss the merits and greatness of The Good Place and its writers. It’s business as usual in an episode full of bad Australian accents, parodied Americans, and sweet sweet lemon bars.

Team Cockroach recaps the season 3 premiere. Our gang is back on Earth! But they revert to their old patterns, so Michael resorts to unauthorized “nudging” to stop their backsliding and get them to team up. MRI proposals! Terrible disguises! And…a Taco Bell and a Pizza Hut!

In a surprise twist that will change everything, Incomparable impresario Jason Snell joins Team Cockroach to discuss the final two episodes of Season 1 and speculate about season 3. Who is Mindy St. Claire? What is Michael’s gambit? Can all your problems be solved with a Molotov cocktail? (No. The answer is no.) Bortles!

Strap on your snorkel, sidestep that falling air conditioner, steal the eternal judge’s train, and listen to Team Cockroach talk about the second-to-last pair of episodes from Season 1, with special guest Brian Hamilton.

Are you facing an imminent “retirement”? Have you been murdered recently? Do you wish we’d all stop calling you “Fake Eleanor”? Let the cube glow green to confirm your story and listen to Team Cockroach recap a record-breaking three, count ‘em, three episodes. Here’s your cactus!

Relax at the spa with your soul-friends, have one of a zillion new frozen yogurt flavors, and listen to Team Cockroach chat about another two episodes of Season 1.

Open your eyes, follow the nice white-haired man into his office, and listen to Team Cockroach’s first season 1 recap episode. Clowns, the joke machine, Florence Nightingale, and more. Join us!

The thought of eternal death getting you down? Don’t despair, listen to Team Cockroach as they finish up the very last recaps of season 2, joined by David J. Loehr.

Team Cockroach wraps “The Good Place” season 2 up like an eternal burrito. We talk about our favorite and not-so-favorite moments and where things are going for Season 3.

The Incomparable 393: The Ol' Reverse Lucifer

“The Good Place” just finished its second season, and we still couldn’t love this show more. We discuss the moral growth of all the show’s characters in season two, break down the meaning of the final episode, and float a bunch of theories about where the show might be headed next.

Michael and Janet arrive to save the day! More than one person says “hot diggity dog!” 3/4 of Team Cockroach return to discuss the season 2 finale’s twists and turns, and what may be on tap for season 3.

Who will the judge be? Turns out it’s not a burrito, it’s Maya Rudoph, and she’s here to tell you how cute your british accent is! Aluminium, testing, and hilarity ensue in this episode of Team Cockroach.

Never believe what a robot tells you.

We’re finally here at the Bad Place Headquarters, and our friends are having trouble looking the part. Will they reach the portal or will they get caught by Shawn?

Hot air balloons, confessed secrets, and a dance party. Team Cockroach discusses the latest “Good Place” episode, where our friends reminisce about their past and wonder about their future, before going to a place the show (literally) has never gone before. All aboard!

Team Cockroach, a podcast from Incomparable listeners about NBC’s “The Good Place”, is back after the winter break! Shawn shows up to reward Michael for his good work. Should the team trust that Michael is helping them secretly, or are they heading to the Bad Place for real this time?

Team Cockroach, a podcast from Incomparable listeners about NBC’s “The Good Place”, returns! In this episode, Tahani and Jason take a big step, Eleanor comes clean with Chidi, and Michael tries to keep Janet and her new boyfriend Derek from blowing the team’s cover with Vicky and Shawn.

It’s time for Team Cockroach, a podcast generated by Incomparable listeners about NBC’s “The Good Place”! This week, Michael investigates Janet’s glitches and comes to an unexpected discovery.

The Incomparable 365: Humour With a U in It

We return to our first wave of inductees into The Incomparable’s Television Hall of Fame, as we enshrine 10 more series that our panelists consider among the greatest of all time. This second batch spans seven decades and includes sketch comedy, animation, sitcoms, dramas, and even a show that premiered less than a year ago.

Rarely do we devote an episode to a television comedy, but “The Good Place” earned our love and your attention. It’s a single story told over 13 half-hour episodes, with twists and turns and a lot of laughs. Why has Eleanor been sent to heaven by mistake? Why did a 70s dude high on mushrooms figure out the secret to eternal life? Why do we keep being gently reminded of Douglas Adams? Why is there a lava man in the conference room? Why does purgatory feature warm beer and Eagles live albums? We break it all down, and leave space after the Spoiler Horn to discuss the many surprising plot developments as the season went along.