Watchers of the Plus 19: Arrow to the Ghosts

Time for the guys to intervene and dam the stream for a moment. They take aim at that Marvel arrow show, people missing in space, and spectral exterminations. Moze also continues to hamper Sam’s train of thought with the magic soundboard.

It’s an impromptu draft this week, as we pick our favorite moments from the Marvel Cinematic Universe and discuss exactly what makes them resonate for us. And we wish a happy birthday to a very special someone.

It’s a far-ranging show this week, as we discuss the shows we’re watching. We have a throwback conversation about the first season of Daredevil, as well as the potential future for Netflix’s Marvel characters in the MCU, plus a frank discussion of what doesn’t appeal to us about The Boys. Then, in our Superhero Sweep segment, we discuss the recently greenlit (eh? ehhh?) Green Lantern series at HBO Max, and our first peek at Marvel’s stop-motion animated MODOK series. Plus, we sneak in a little Star Trek talk. Of course.

After one whole year the Daredevil binge is over. Though is it really a binge if it takes a whole year? Well some questions are better never answered. Sam and Moze did answer some of the questions this episode like Vanessa’s whereabouts and just how the season landed overall. They wax and lament the future of TV MCU and what it will take for a cheapskate like Moze to pay for another streaming service. It has been a long ride, and Moze is glad that he got to finish his work. Whew… The End.

Just where is Vanessa?! Spoilers for a show that’s a year old … almost. We’re back, provoked by Twitter guidance. This episode does finally reunite our three heroes, Matt, Karen and Foggy, just like the old days. Time to get invincible and pull that kingpin down!

When it comes to family owned and operated Moze found a special guest. Sam Adams, member and conversationalist, joins for a powerful rewinding of “Karen.” What did we learn abut her that we didn’t know? Why does her father dismiss her in previous episodes? How is her story important to Murdock and Dex? Get your Kingpin bald cap on and let us dive in!

Oh true believers, Matt’s already shaky world is tilting on its axis and he learns a shocking truth. Karen is now on a run for her life, but why?. Our own Special Agent Nadeem discovers how deep the Fisk long game actually goes. 4th dimensional chess anyone? Join Moze and Vic Hudson for a breakdown of how Hell’s Kitchen responds.

The unexpected continues to please as this episode gives us a surrogate father and biological mother. How far can the Kingpin’s plans go? Deeper than any of us are prepared for, that deep. Maybe only Foggy can truly save us with super-powered litigation and politics. Join Eric Scott and Moze as this episode nearly makes Moze show his creamy nougat center. Again.

Here is the episode of experimentation you have been waiting for. Golden Tony steps in to Hell’s Kitchen cold as ice. Tony agreed not watch any episodes of season 3, mostly because he is behind on some of his Marvel TV and the guy is just busy. The experiment was not without flaws, but the results should be on the record for your listening satisfaction. Moze was worried that “Aftermath” could be a furniture moving episode and become a flatline of interest for Tony. Was the hypothesis correct? Let us listen together and see.

What happens when the world we know gets controlled and affected by Wilson Fisk? You get a new kind of devil, and a recap by none other than Guy English and James Thomson with a little masterminding by Moze. The stakes are now rising as Matt continues his mission to shine a light on the Kingpin’s plans. Fisk, as always, is a few steps ahead of the game and introduces a new fly in the ointment—a Dexdevil.

What do you do when your main character is at the bottom of the East River? Easy, you let all other characters grow and to increase the richness of the narrative. At least that’s what should happen. Jason Snell is on the mound to see if Moze can get a hit. This episode shows just how powerful Wilson Fisk is and what it means if he gets into your head—like he’s done to Dex. 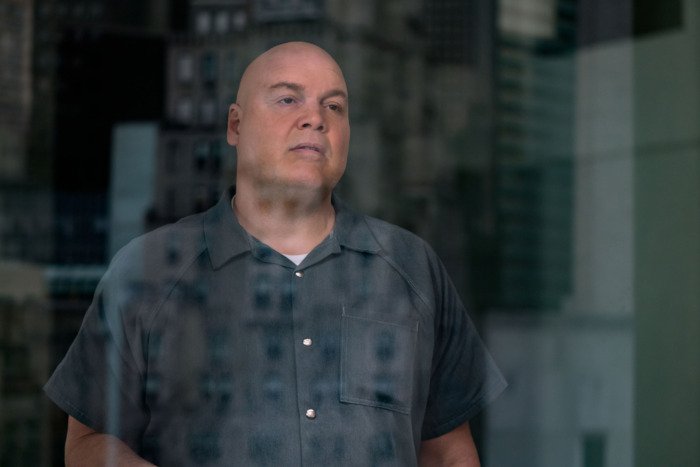 Here we go the episode that caused panelists to hate Guy English almost as much as Moze. It’s time for the trademark long-take fight scene that Daredevil set the bar for so long ago. Was it as good as seasons past? Per the usual format, Guy and Moze step away from the episode and discuss events that impact our red friend and postulate when we will see him again. If we do, will it be the cast we have grown to love?

Welcome to the 500th episode of TeeVee, Woot Woot! For this grand occasion, Moze reached deep into our pocket of talent to give the listeners The King of Scotland, James Thomson. We gathered our thoughts on just who is the best Bullseye and the impact it may have on Marvel canon. We also pose the question, “Will you pay for Disney Streaming?” As per usual Moze has predictions for the season and James neither confirms nor denies his mystical powers of narrative. Capping off James and Moze give “homework” to each other and to you, our powerful listeners. Much apologies for the delay on episodes, but fear not, we are back on schedule for your listening delight. Sean and Moze look at where this episode digs into the characters and where this season will begin to shape what they will become. We also digress to the overall Netflix universe and what will happen to the Marvel Television Universe. Back from the dead, Matt Murdock returns to Hell’s Kitchen. Badly beaten, he stays in hiding to heal and decide if he will live as Matt or die as Daredevil. Unknown to him, Wilson Fisk would like to make a deal with another kind of devil. We also discuss breaking news in the Netflix / Marvel Streaming Universe. (Uh, what do we call that, the NMSU?)

The finale of Daredevil is here and we give our eulogies to so many dead ninjas. Join us as we look into our crystal ball of predictions for the street level Marvel Universe.

This episode brings Tony Sindelar to the kitchen to converse frankly about what has happened to this season of “Daredevil.” We all agree ninjas are awesome. However, is there a point of diminishing returns investing in a ninja army? Join us as we break down the highs and lows.

Want a way to support this rewind show as well as other great shows on The Incomparable Network? Go to theincomparable.com/members, you can sign up for a monthly subscription that will support the shows you love, including TeeVee. In return get access to some bonus features including special podcast feeds for bonus audio, official bootlegs of live sessions, and other great Incomparable stuff.

The courtroom action drama that just won’t quit with special investigator James Thomson. In this episode we cover “Semper Fidelis,” “Guilty as Sin” and “Seven Minutes in Heaven.” NINJAS! 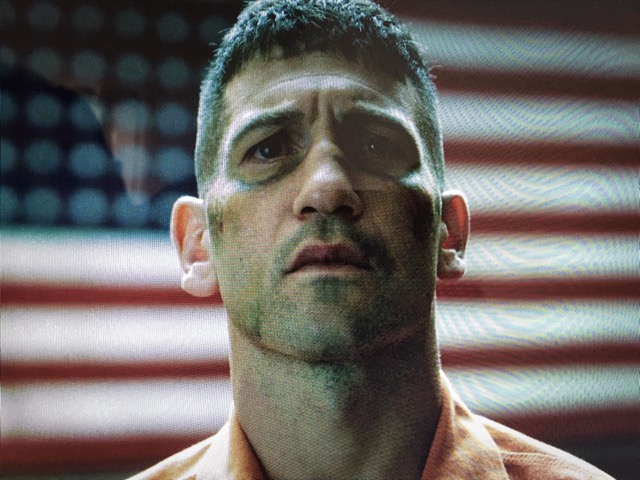 Back from working hard on simultaneous adventures and work, Moze and Don wrap their hands for a three round fight in the kitchen. This episode covers a crucial triptych arch in the Daredevil saga. 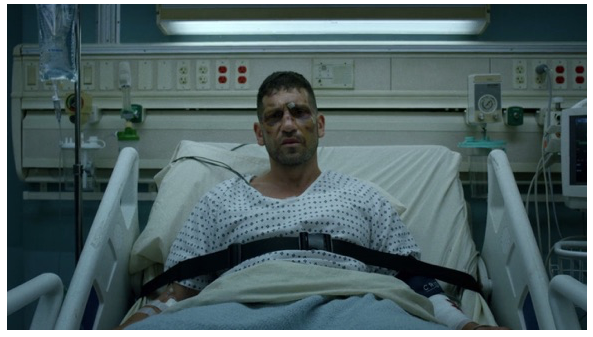 Trapped face-to-face with the Punisher, Daredevil wrestles with the morality of vigilante justice. Meanwhile, Foggy and Karen work to save the firm. James, Jason and Moze try out their best legal Kung Fu to break down this episode.

Join us a we sweep up some broken glass, because it looks like no one else in this episode will. As Murdock recovers from an attack, Foggy and Karen fight to protect their new client from both the law and the Kitchen’s newest vigilante.

Happy St. Matty’s Day! Daredevil is back with a “Bang!” Join us in our discussion and breakdown of the Man Without Fear this season.

In this last episode we stand along the rooftops of Hell’s Kitchen and reflect upon episode 13, simply titled “Daredevil.” Jason Snell drops into the fray to finalize and put the Devil to bed. Thank you to all of the Rewind guests and thanks to you, the listeners for sharing time in the Kitchen. 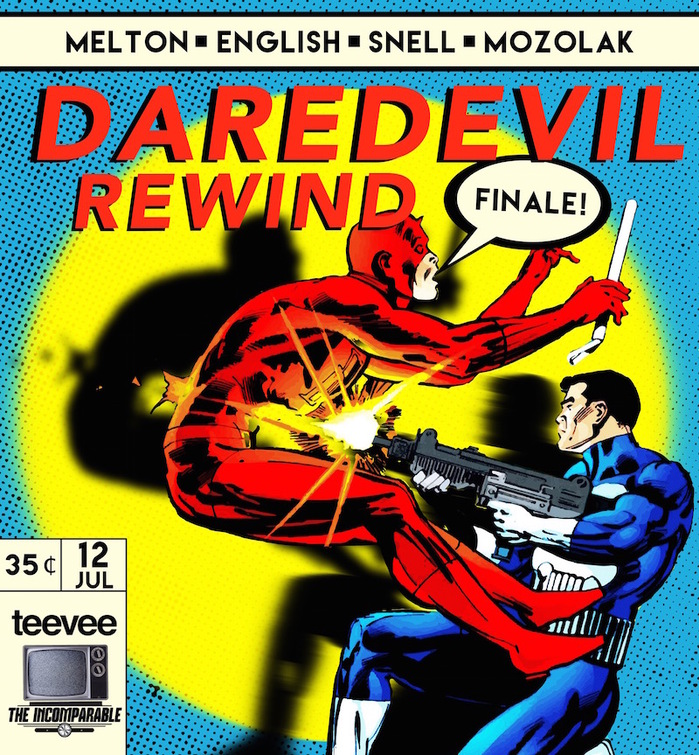 After a season full of comic-book superhero TV shows, we’re here to chart the highs and lows of “The Flash,” “Arrow,” “Agents of SHIELD,” “Agent Carter,” “Daredevil,” and “Constantine.” Some of them were great, some quite surprising, and others crushing disappointments. (This episode contains light spoilers—nothing we consider completely earth-shattering, but if you wish to be completely spoiler free, listen after watching or consult the time code in our show notes.)

In this episode we try to encapsulate the meatiest portion of the Daredevil series, “Murdock vs. Nelson”, “The Path Of The Righteous” and finally “The Ones We Leave Behind”. Two new tenants in Hell’s Kitchen have moved in to cover the events. 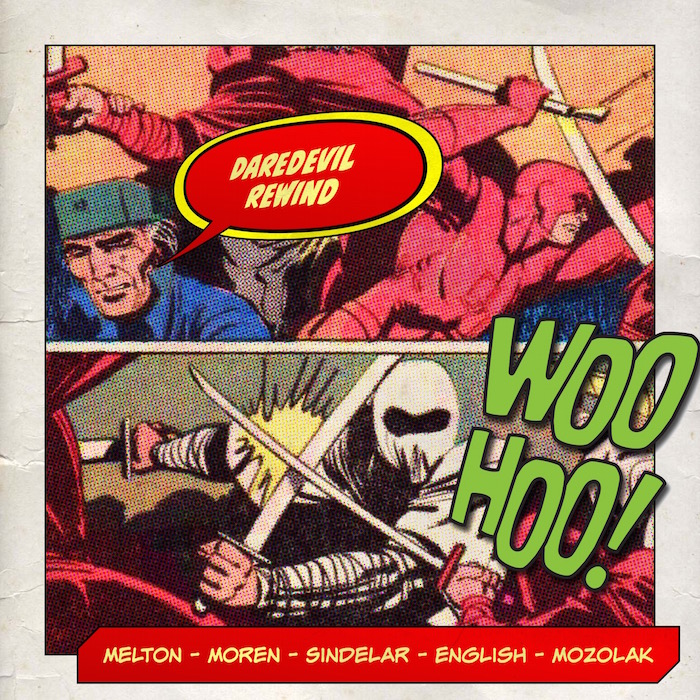 Sweet Mrs Cardenas brings Hell’s Kitchen back into chaos. That might be pushing the truth. However, there were ninjas, lonely breakfasts, bloody hammers and a man called Stick. Those kinds of things Bring Guy, Merlin and Moze to a fever pitch. Come raise your glass to the show that has no right to be this good. 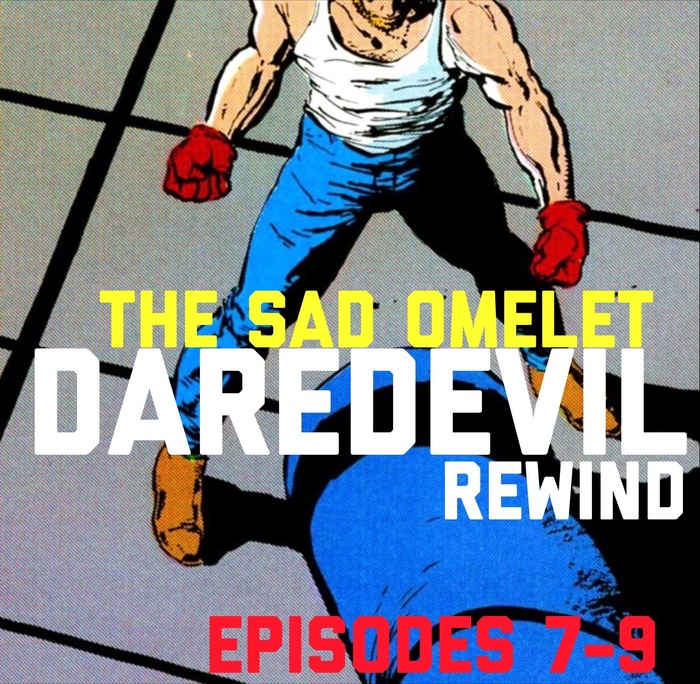 In this episode we crest violent bloodshed and flow with universe building. Characters are further fleshed out as the tides begin to rise again. Merlin “The Hammer” Mann and Dan “The Anvil” Moren bring their pipes to help Hell’s Kitchen. 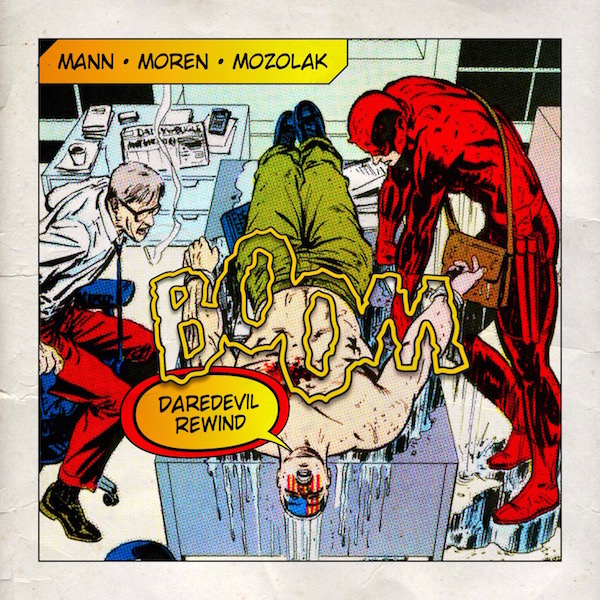 Out of the ashes of Ben Affleck’s curse, Charlie Cox stars as Matt Murdock in the Netflix series “Daredevil.” These streaming series have a flaw—the temptation to ingest and forget. Guy English, Chip Sudderth and Philip Mozolak are fighting to keep our memories fresh by breaking down the first three episodes.

You can subscribe here to the Daredevil-only podcast feed.