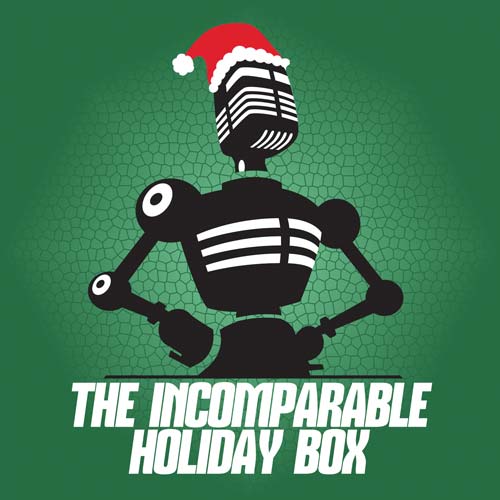 A podcast advent calendar from The Incomparable.

Brain Crabs in Your Stocking

A Visit from St. Nicholas

We had a Pop Up Book edition of this poem, which my father dutifully read to me on Christmas Eve every year.

Happy Christmas to all, and to all a good night.

Bonus box item! The boys from The Flop House Podcast tackle the war-on-Christmas movie “Last Ounce of Courage.” If you think this one is funny, please go subscribe to The Flop House, which is one of our very favorite podcasts.

Rehearsing in the Zeppelin

Did you know that we’re releasing a season of Incomparable Radio Theater in 2015? It’s true! In fact, right now we are rehearsing the script on the Incomparable Zeppelin…

At the end of a secret recording session last week, Jason asked for holiday anecdotes. And then things fell apart.

Last year’s “Doctor Who” Christmas special saw Matt Smith say goodbye to the TARDIS, but not before an adventure in the town of Christmas on the planet of Trenzalore. Cyberman-head companions! A turkey that takes 300 years to cook in the vortex! Lots of past plot boxes checked! A teary farewell and regeneration! Kidneys of a dubious color! Onward to Peter Capaldi!

Our “Doctor Who” Christmas special flashcasts continue with this one from 2012 covering “The Snowmen.” Jenna Coleman returns to the show, but is this the Clara we’ve been waiting for?

From 2013’s Incomparable Radio holiday special: A roller-derby champion discovers what it means to be a legend; Canadian separatists threaten a ship on New Year’s Eve, and only The Fog and Margo can stop them. Brought to you by Cornet Blue Disposable Facial Tissue and Chock Full Of Coffee.

Not in the Vault

The follow-on to yesterday’s episode, this Bonus Track features 12 minutes of additional holiday talk and silliness.

From 2013: We talk about Holiday TV, good and bad, and Steve Lutz reveals a deep, dark secret about his own Holiday TV past.

Phil and Lisa Ruin the Movies 5

New! Phil and Lisa ruin Christmas with their critiques of holiday movies from the Hallmark channel. Lisa suggests that Hallmark should tap the polyamory market.

In a special holiday episode from 2013, Dot and Nik run into an unexpected set of fellow time travelers. And Dot is confronted with memories of her own Christmas past. Brought to you by Lohengrin Beer.

The Screams of Trees

Our Doctor Who flashcast from 2011 discusses “The Doctor, The Widow, and the Wardrobe,” and why Christmas episodes make us feel warm inside.

We never said all of these selections would be from our podcast. This one’s Dan McCoy from The Flop House, with a hot take on a Rankin-Bass special from his youth.

And sure to visit The Flop House, one of our very favorite podcasts.

This is one of my favorite episodes from 2010. It’s a look at the favorite gifts we received during childhood. Dan still misses his Transformer.

From 2012: This is the Bonus Track before and after our Holiday Vault 2 episode. It’s pretty much what you’d expect from us during the holidays. And Glenn praises “Bad Santa.”

From 2012: Five new gems go in our Incomparable Holiday Vault. Plus we talk about some uncovered racism in holiday classics, Andy champions the annual David Letterman Christmas episode, and Steve inducts a horror movie.

Part of our 2013 holiday radio drama: Paul Citron runs into a holy mess in postwar Vienna; Marjorie, Milo, and Rudolph venture deep into Finland’s interior to find a magic item and discover an old friend. Plus, regular holiday updates from Carl Phillips and the Gotham News Roundup. Brought to you by Kleinman’s House of Music and Bushmill-Schmichaels Distillery.

We’ll be back with a full season of Incomparable Radio Theater in 2015.

Yes, They Know It's Christmas

A celebration of “Do They Know It’s Christmas?” with an outtake from this weekend’s The Incomparable, plus a bit about it from last year’s holiday music episode.

Christmas with the Doctor

It’s Saturday, which is traditionally “Doctor Who” day. So here, from 2010, is our flashcast review of Matt Smith’s first Christmas special, the excellent “A Christmas Carol” starring Michael Gambon.

From 2011: We induct six holiday films into the Incomparable Holiday Film Vault. It’s a great excuse to talk about favorite holiday movies of ours. And so we do!

Continuing our exploration of “Die Hard,” this is the episode of “Not Playing” where Dan got to show Lex one of his very favorite movies for the very first time.

As this is a podcast about an R-rated movie, there is swearing.

We're Going to Need Some More Christmas Movies, I Guess

From 2010: We discuss “Die Hard,” which is totally a Christmas movie, don’t let anyone tell you otherwise. Yippie ki-yay, my friends.

[This is a podcast about an R-rated movie, so it contains some swearing.]

Our holiday songs episode from 2013, which was yesterday’s Holiday Box selection, was one of our more raucous recording sessions ever. There was the positive stuff, which formed the first half of that episode. Then came the negative stuff, which formed the second half. But then there was all the dark, weird stuff. Stuff so dark and weird that Jason, who was hoping it would be an episode that required no editing, ended up spending more than five hours extracting the weirdest and darkest stuff so that it didn’t poison anyone’s holiday mood in the main show.

This Bonus Track contains all of that weird, dark stuff. (Plus a delightfully dark song by our very own Steve Lutz.) Burn after listening.